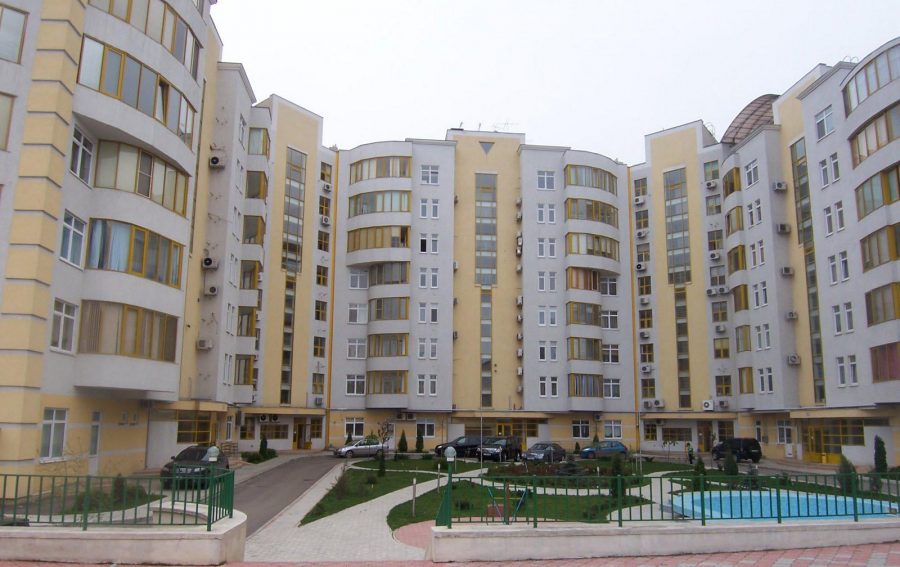 The Different Types of Apartments

When visiting a great destination, deciding where you must stay at is a difficult task. There are already several options to choose from. Would you stay in a hotel, a villa or in an apartment?

Experts say that staying in an apartment is a better option, most especially when you are staying for several days or weeks. You certainly can save a huge amount of money. Also, you will have more living space. Also, you get to cook your own food and wash your clothes.

Convertible – This features a space large enough to be walled off. Such space can also be used as bedroom or a dining area. For instance, a convertible 2-bedroom is a place with a huge bedroom along with an area which can be walled off to create another bedroom.

Studio – This has a single room with a kitchen and full bathroom. It might have an alcove for dining or dressing.

Loft – This is a large room in a building that was converted from commercial to residential. It has very high ceiling and windows. It can present with anything from a studio to 3-bedrooms.

Alcove Studio – Alcove is defined as an area not more than a hundred square feet located off of the living space. This is otherwise known as a half room. It can actually be walled off to create a dining alcove or a sleeping alcove – this will greatly depend on its size and location.

Junior 1-Bedroom – This is a step up from a studio. It often features a separate area for sleeping or dining.

Junior 4 – This is a 1-bedroom apartment having a separate small room or a dining room. It got its name from featuring 4 rooms – a living room, a kitchen, a bedroom, and an extra small room.

3-Room – A rail road apartment is the best example of this wherein several rooms are connected by doors but no hallway. The apartment has 3 rooms; however, the layout does not lend itself to creating more than 1 or 2 bedrooms.

2-Bedroom – This has 2 bedrooms, a kitchen, and a common living space.

Duplex or Triplex – This is an apartment with 2 or 3 levels. The levels might be unique wherein the second or third level is for sleeping only. Others may have actual floors with bathrooms on every level.

Beachfront – This has a beach on one side. It may be situated along or has direct access to a beach. 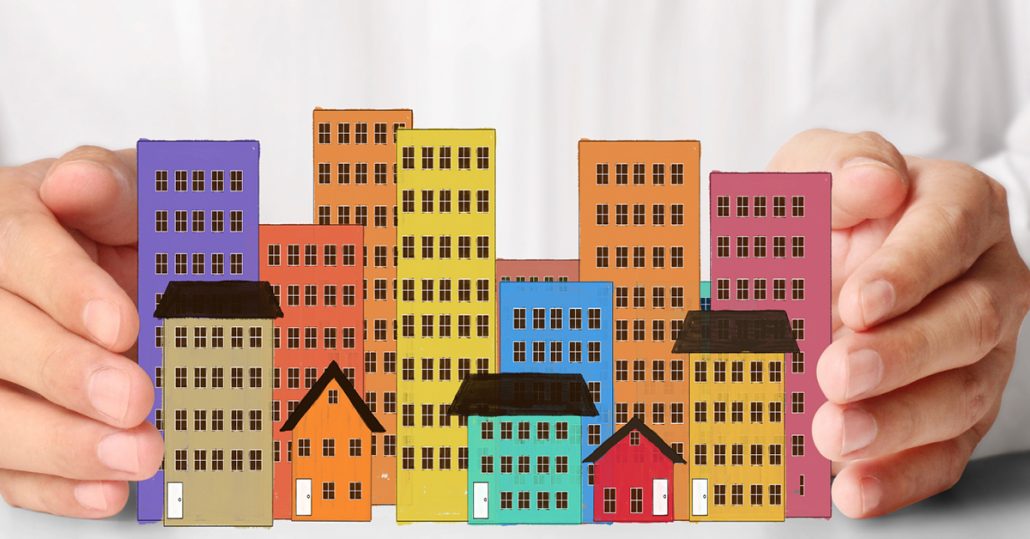 Not all apartments are the same

The names are coined by housing developers with creative plans to woo investors with enticing marketing tools on yet-to- be-built stratified properties.

Where people used to buy an apartment unit/parcel for a roof over their heads, of late, so many other styles have crept up to boggle the minds of investors and buyers.

However, for the uninitiated – not all apartments are created equal. Although the sales and marketing brochures may look alike, the small prints will tell you the difference, if you care to take a magnifying glass to inspect.

Then again, for the first-timers, they are unlikely to spot the difference. This article aims to shed some light for those who have yet to decide on the various offers of apartment projects and for those who have suffered the fate of having bought into a problem.

How many of us have based our decision to buy a home on colourful brochures and enticing lifestyle illustrations? Many prospective house buyers usually have little knowledge of what aspects to look for when acquiring a home.

The construction of a housing project involves numerous parties and legislations, and when problems arise, help in any form is often time consuming and costly. The onus is on prospective house buyers to be educated on their rights and to seek help from all sources available before they make their first payment.

It is important that buyers know their rights and how to use them. The Housing Development (Control & Licensing) Act 1966 (amended 2012) (‘Housing Act’) controls the development of “housing accommodation”; “housing accommodation”; may not be the same as what you think you are buying. Purchasers of service apartments and Soho are often surprised when told they have bought a commercial property.

The statutory sale and purchase agreement (S&P) is schedule H (building or land intended for subdivision into parcels) and schedule I (built then sell 10:90 concept for stratified property) pursuant to the housing development (control and licensing) regulations 1989 (amended 2015).

Under the statutory S&P, some of the pertinent clauses for the protection of house buyers are the following: 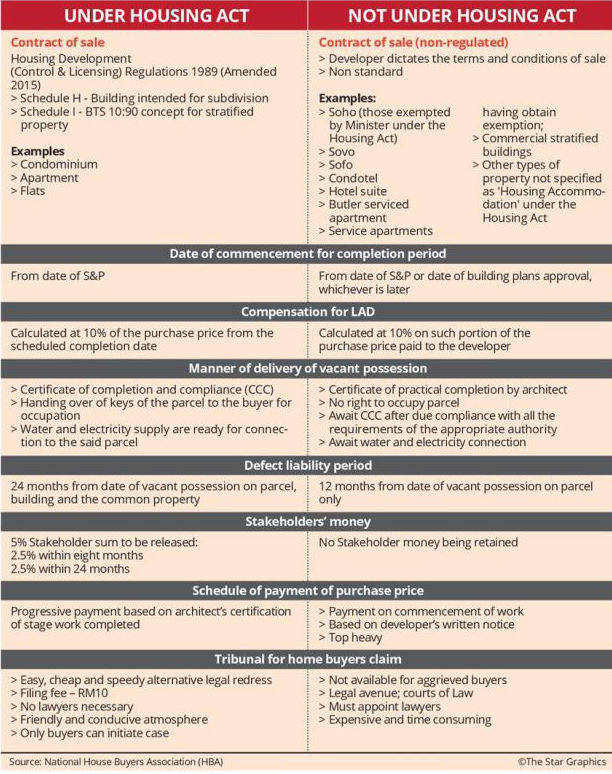 Date of commencement and completion – Generally, the date of the S&P is the date the contract takes place and is binding upon both the covenanting parties – the developer and buyer. It is scheduled to be completed within 36 months from the date of the contract.

It is a pre-requisite that all building plans, lay-out plans and all the approvals from the local council must be obtained before a housing developer is able to obtain the APDL (advertisement and sales) permit and developer’s licence.

Compensation for late delivery commonly known as LAD (liquidated ascertained damages) – is calculated at the rate of 10% of the purchase price should the developer exceed the stipulated period of 36 months.

Defect liability period – The developer is mandatorily required to warrant against defect, shrinkage or other faults in the parcel, building and the common property that may become apparent within 24 months after the date the purchaser takes vacant possession.

Stakeholders’ money – The retention sum against repairs and replacement is 5% of the purchase price and is kept by the developer’s appointed lawyer stakeholder and to be released in two tranches.

Schedule of payment of purchase price – Every stage of the works completed must be supported by a certificate signed by the developer’s architect or engineer in charge of the housing development and such certificate so signed shall be proof of the completion of the various stages of progress works.

Tribunal for home buyers claim – The Parliament has created the housing tribunal as an alternative platform for house buyers to seek legal redress. It is an easy, cheap and speedy alternative forum. Since it was to be a tribunal or “court” for the ordinary house buyers, numerous measures were taken to ensure that it was user-friendly and affordable, including a cap on filing fee at a nominal sum of RM10, and keeping lawyers out.

These non-standard S&P agreement are drafted under the whims and fancies of those developer with their lawyers. Efforts are not spared to ensure that they are disguised with bold titles appearing to emulate the statutory S&P but with diverse terms and conditions embedded otherwise.

It is not uncommon to find buyers stressed out and frustrated after having identified the differences between the standard and non-standard S&P agreement. By that time, the relationship between the developer and the affected buyer would have been strained and stained.

Date of commencement and completion – At the time of sale and the date of the S&P the developer often has not obtain the necessary approvals – be it building plans, floor plans or the likes. Their completion date is what is stated in the S&P – often between 42 and 48 months from the date the “building plans” approval is obtained or date developers under this category are not licensed (thus, not under the purview and jurisdiction of the Housing Ministry) because they are not building “housing accommodation”. There is neither any requirement for an APDL nor need to comply with the Housing Act. Those built on commercial titles will have to bear commercial rates of assessment, quit rent, utility charges (electricity and water tariffs). There are instances of housing developer constructing Soho that has been granted exemption from the Housing Minister – thus, to be precluded from the ambit of the Housing Act: on the pretext that they are developing commercial development.

Compensation for late delivery commonly known as LAD – It is often calculated at the rate of 10% on such portion of the purchase price as the buyer may have paid to the developer where it exceed the stipulated period of 42 to 48 months, as the case maybe.

Manner of delivery of vacant possession – Delivery of vacant possession is often only supported by the developer’s architect’s certificate of practical completion not tantamount to CCC. It does not give the buyer the right to occupy the parcel until such time as the CCC is issued. Where there is no time frame to issue the CCC, it becomes meaningless and the buyer will not be able to plan his occupation. There is no provision for connection of water and electricity supply to the said parcel. It is sometimes at the peril and mercy of the utility provider.

Defect liability period – Here, the warranty against defect, shrinkage or other faults in the parcel is often 12 months after the date the purchaser takes vacant possession.

There is often no warranty on the building and common properties.

Stakeholders’ money – What retention sum? Often, there is none. All monies are released to the developer immediately upon date of notice of delivery of vacant possession, whether the buyer takes physically possession or not.

He will conveniently have his tractor scoop up the earth and hence – commenced. He too will get another payment 15% on commencement of his first piling and footing works.

Most of these projects fail because they collect profit before completing the job. Their payment schedules are top heavy – meaning they collect the bulk at the beginning leaving less for the later stages of works.

Tribunal for home buyers claim – The tribunal is not available to the aggrieved buyers. Their legal recourse is through the courts and they will have to argue within the four corners of the S&P contract. They cannot say that they don’t know – as the maxim goes: “Ignorance of the law is no excuse’

In the cases of “unfriendly terms and conditions”: “Don’t buy”. The prerogative is the house buyers’ to safeguard themselves though all means.