Due to the slow growth of economy in Malaysia and some new policy, these have affected property industry as well especially Islamic Mortgages. However, expert predict that it will recover soon.

Shariah-compliant home loans increased 17 percent in the first nine months of 2015, after rising an average 29 percent annually in the past five years, according to central bank data issued in October. Malaysia has raised property gains taxes, cut the maximum tenor on lending and placed limits on foreign ownership to check speculation in the market.

Bank of America Merrill Lynch economist Chua Hak Bin forecasts growth in Islamic mortgages will ease to below 10 percent in 2016, which is bad news for Malaysians seeking to get on the property ladder but a healthy development as the government seeks to reduce leverage. Fitch Ratings warned in June that consumer liabilities need to be managed to avoid derailing economic activity and building up disproportionate financial risk.

“Property projects have started to slow and stricter macro-prudential requirements have tightened bank lending as the risk of property prices sliding increases,” said Singapore-based Chua. “My sense is that mortgages, including Islamic mortgages, will slow to single digits in 2016.”

While growth in home loans complying with Islam’s ban on interest eased, lending still climbed to a record 90.6 billion ringgit ($20.9 billion) in the first nine months, after rising 25 percent in all of 2014 and 30 percent in 2013. They are dwarfed by conventional counterparts, which rose 6.7 percent to 318.6 billion ringgit, following increases of 10 percent and 11 percent in the past two years.

Malaysia’s household debt amounted to 87.9 percent of gross domestic product as of December, according to central bank figures. Bank of America’s Chua said it stood at 988 billion ringgit in September, equivalent to about 87 percent of GDP using his own calculations, up from 66 percent in 2007. He said that’s the highest in Southeast Asia, an observation mirrored by Standard & Poor’s at the end of last year.

Fitch’s June report, written by analysts including Elaine Koh in Singapore, said the 10 percent increase in household debt in 2014 was a “healthy adjustment,” after falling below 2010’s 15 percent in the previous three years.

Mortgage growth could slow further as Malaysians face higher living costs. The government introduced a new 6 percent goods and services tax in April, and has increased highway tolls, bus fares and cigarette prices. Rail fees are due to go up in December. Consumer sentiment fell to its lowest since 1998 in the third quarter amid a slump in the ringgit and oil.

“It’s getting more difficult to obtain house loans since lenders are becoming stricter,” said Abas A. Jalil, chief executive officer of Kuala Lumpur-based consultancy Amanah Capital Group Ltd. “In 2016, the growth rate in Islamic mortgages is expected to be lower than previous years based on the overall economic growth projection, but we could still expect to be in double-digit growth.” 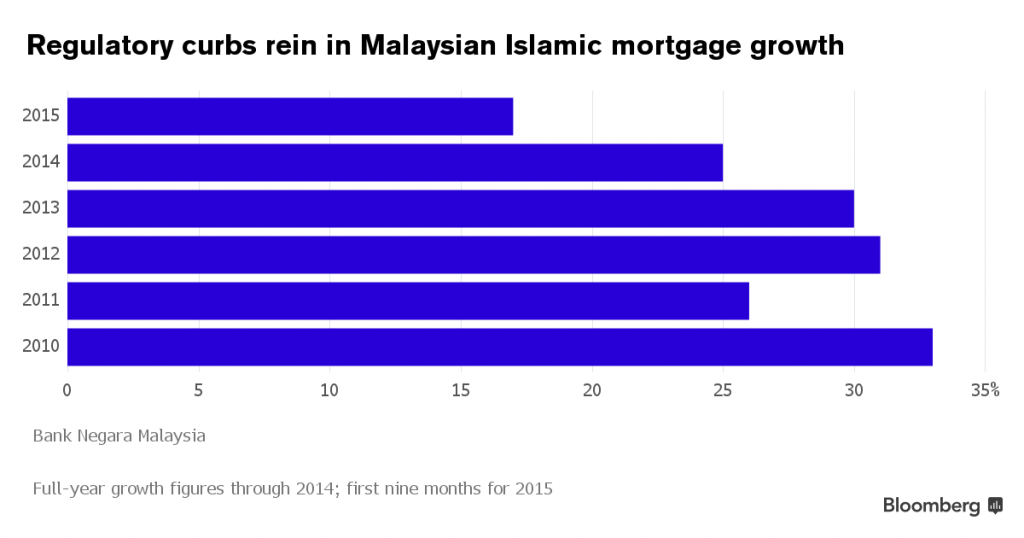 Islamic housing loans differ from their traditional counterparts in that a bank typically buys the property on behalf of the customer and rents it back at a markup to avoid interest payments. In Malaysia, where Muslims account for 61 percent of the 31 million population, Shariah-compliant mortgages are available to people of all faiths.

In 2013, the government increased property gains taxes and cut the maximum tenor on home loans to 35 years from 45. A central bank regulation in 2010 also limited the amount that can be borrowed for a third property to 70 percent of its market value.

Malaysia’s $327 billion economy expanded 4.7 percent last quarter, the weakest pace in more than two years. The finance ministry forecasts growth of as much as 5.5 percent in 2015, down from 6 percent last year, and envisages a maximum 5 percent in 2016.

“We are expecting moderate growth for Islamic property financing,” said Dzulkifly Aminuddin, head of consumer financial services at OCBC Al-Amin Bank Bhd. in Kuala Lumpur. “The continued sluggish economy, seen in the weaker ringgit and the general higher cost of living, together with other uncertainties, have to an extent contributed to the lackluster sentiment.”

Hopefully the economy of Malaysia will recover soon. 👍